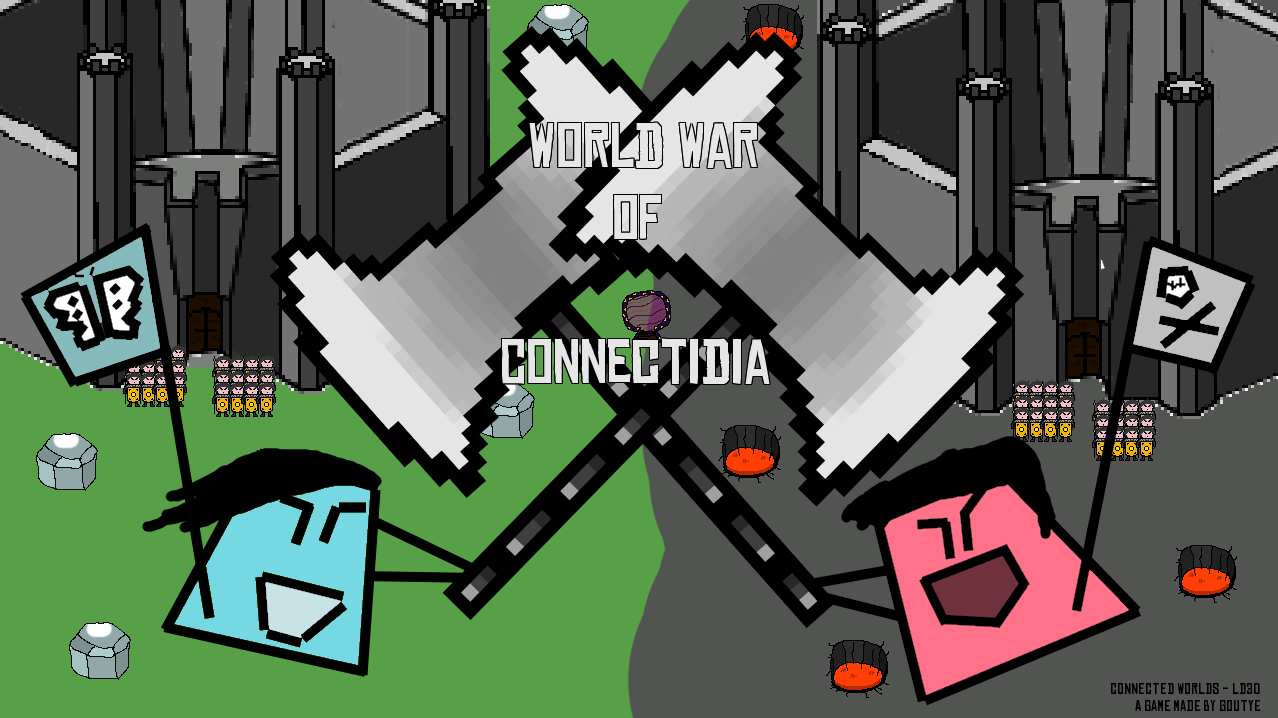 The 30th edition of Ludum Dare has ended! What’s up ? A lot of thing! Let’s write the recap’ of these previous 48h!

Let’s take a look at my last goals :

I managed to fulfill all of these goals with a huge success ! o/…

At the beginning, Suteben-sensei told me “Hey ça va être Connected World tu vas voir”. It was only 20h. I planned on sleeping before LD30 between 20h and 1h. But because of this guy, I wasn’t able to sleep until 21h45 at least… Why? Because I was thinking about a game on a theme like this one. What I was thinking was really ambitious and complied with the theme.

I woke up and took a shower. 1h30, Suteben-sensei was always here to wait with me for the theme revelation. The master Ao-sensei was here but only just in time to know what had been selected.

3h01, the theme poped! “CONNECTED WORLD”. My eyes sparkled! I took a pen and wrote all of my previous ideas (When I was sleeping, I had many concepts !) and started directly to write the engine !

Before 5-6hours, I’d a screen split horizontally and a player in each part of the screen ! The player was just a square. A beautiful square! I think, that’s the best choice I’ve ever made. Because, collision between squares is really easy! Then, in a matter of minute, my collision worked with both maps. The worlds were linked, and my game was really launched.

What’s my goal now ? Create a management/fight game! How is it working? You need to expand your territory. For that, you need to hire farmer to develop your inhabitants. The circle representing your available area will expand until you reach the portal! The portal is the key between both these worlds!
You’ll need to destroy it to break the links between both these worlds. But the portal will not let you destroy it easily. The portal will weaken with the passage of soldiers troop. Then you can destroy it with your weapon.

After ? Oh… Yeah, in 48h, I was just able to program these two phases. But in my real idea, I want to add the story of “Why there is a portal here between these worlds”. Actually, both these worlds were one world in an ancient time. But the emeralds, the enemy of this world, broke this world with their emerald magic. Then, the world split in two worlds representing the light and the darkness of the previous world. And that’s why these worlds are linked.
So, after we destroy the portal, we would have seen appearing the emerald world with its fortress. Our goal will be to destroy the fortress defended by a “Boss”, the warchief of Emerald People. They send their troop to your fortresses as your king did previously against the light or dark world. And so, you WIN ! Yeah, too ambitious. A little bit to long.

Let’s go back on what I actually done. I then programed all of this script but I thought I would run out of time. So, I stopped my first day when we reached Sunday (Midnight). I slept only 5 hours and returned to programing the remaining script. After midday, I had a game that worked. But my head thought this game was impossible to balance. Since the beginning, I had too many Bats during my test. but with a log(x)+sqrt(x), I found a good balance. But farmers, miners and lumberjacks were really hard to balance. I tried and succeeded a little bit. And when 15 h was there, I had a game that worked very well. Without music, Without SFX, Without menu, endscreen etc.

Many many… MANY Bats ! WARNING ! Troops are coming

I spent the remaining time on the tutorial (2 hours), the titlescreen and the endscreen until I had a good game interface. I spent also this time on a better looking User Interface. And after that, I created the ModeScreen.

What’s it ? A strange idea in my mind. It felt like my game was not really fun. Complicated to understand. But the second part of the game (after discovering the portal) was really interesting and funny. So, I created a second mode. “Legion mode”. This mode made me really happy. I like this part of the game and I really succeeded in creating an interesting mode. I added difficulty like “EASY” and “NORMAL” mode. They worked. But the “HARD” version was not tested. Too hard maybe, I don’t know!

So… I reached 22h30. 4h and half remained. What could I do now… OH… Holy sh*t. Music and SFX. I spent the last 2 hours in music and sound effect. I realized a nice menu music with cgMusic (Midi generator) and LMMS. And I tried the autotracker.py found by Kidanger-kun. Best guy ever known… Oh wait. After some generations, I felt happy. I liked the music quite a bit (except the menu music !).

… AND… The last hour arrived! That was, maybe, my really “funny hour”. I added the Kings interventions on the screen o/ I liked that and laughed a lot when I saw them yelling at you o/ “ATTACK!“.

And I sent my game :’) I was not really happy because I thought my game was not really fun. But really ambitious and a bit too long and repetitive. But the legion mode deserves to be played because it was funny for me. Then… What can I say about this LD30… My next goal for the next Ludum Dare.

I liked programing this game even though I had cramps in my fingers.
For the next Ludum dare, I need to focus on a short but funny game, more than a long and difficult game. Now that’s this game it’s done, I’m not afraid of my graphics skills anymore. Because Paint.net and my skill was really good during this LD. The titlescreen is beautiful and funny. The troop is well drawn and the fortress too.But I think my human sprite skills are pretty ugly. UGLY. :'( … No words can describe the pain on this poor player. :/

What’s next ? September is coming. May be a game project but I need to work on JAVA and C++. So, I may try to create a game in Java. But now, I want to catch up with my watching list…