Another 6 months has passed since the last time I wrote here. Nevertheless, this does not mean that I did nothing. These 6 months were the most exciting months with a lot of works in different panels again.

Let’s start with the internship I’ve done at Vanguard Games. I joined the company on the first of March, as written in my previous post. The first work I was involved in was a HTC Vive prototype, particularly to create a demonstration for a certain show. Since this time, my whole internship has been focused on the Virtual Reality field. From HTC Vive to Google cardboard, I had the opportunity to work with almost any single existing VR devices (Touch controllers, Gear VR, Oculus Rift, etc.).

Following this first game project, I spent 2 months and half on multiple research projects to target the Gear VR. This time, the goal was mainly to experience Virtual Reality on Gear VR and Google Cardboard, so by using a smartphone. Their power are really limited. Due to this, the goal was to find ways to get a render as realistic as possible without expanding too much the time to render a frame, and so the framerate. The experience was a 360 degrees panoramic video, with real time objects added. But also how to capture such 360 degrees panoramic video in the existing games of Vanguard Games.

At last, I joined for the last 2 month and half the newly created team around a new game project for GearVR. It was my first real game project and I learned a lot from the programmers I worked with, but also from the artists, animators, game designers and other colleagues that were taking part of the project. This was thanks to the small team we were, a huge experience that will definitely help in my future career. I cannot say much about it from now, but will detail later on.

For more information, Vanguard Games changed their name to Force Field VR, with their switch to VR in Spring 2016. Recently, Landfall was announced, a project where I didn’t work on but participate to the capture of the 360 degrees panoramic videos.

My internship at Force Field VR allowed me to experience for the first time a gaming industry, where I felt in love with. Working there was a pleasure everyday and pushing forward any project in the virtual reality field was a blessing. Learning everyday was certainly the most important thing I will ever be in debt with. The knowledge I acquired will definitely help me in my future career. So, thank you all again! 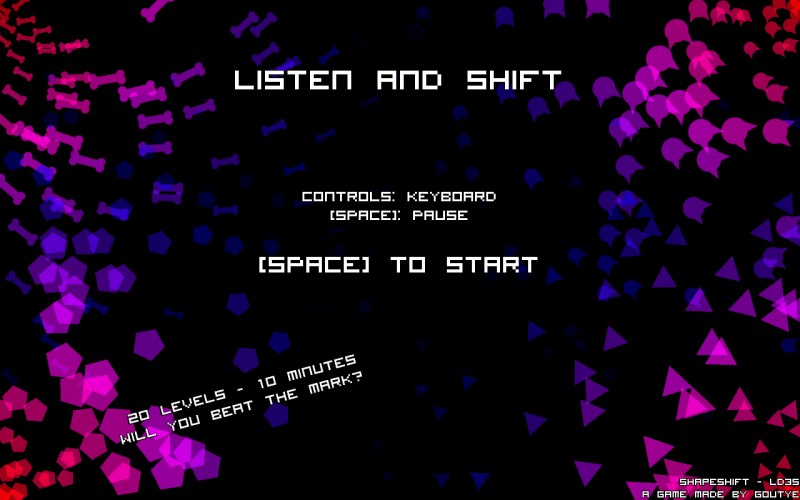 To get back to my life during these 6-month internship, the first month had a Ludum Dare event where I nevertheless almost failed to participate. Being already busy with a lot of administration stuff due to my move to the Netherlands and the start of my internship, I almost had no time to prepare anything this time. I got frustrated by the theme, and at the same time by the number of bugs I ran into in my first hour of test. However, the next day, I woke up with motivation, with an idea that might be doable in just 12 hours.

Surprisingly, I managed to get the game out, polished, with all the things I wanted in. The marks were also surprisingly good and comforted me in the fact that you should use the first 6-hours of a Ludum Dare to think deeply about your game, the fun, and what makes it different, innovative, and memorable.

This game is axed around what you hear. The goal is to reproduce a sequence of letters with the keyboard depending on what you hear. For instance, if the game says Dog, you have to press D when required. The funny part comes when new rules are added, such as “Enter the last letter of each word”, or “Spell the word”, or other even “A Square is followed by a Circle” which means that each time you hear Square, you have to also enter the correct key for the circle. It was funny to record with my voice, as usual.

The innovation mark is certainly the most interesting one. First time reaching a top-100 in one of the field. Most of my Ludum Dare games are trying to be different, are trying to innovate and I was proud to get such a good mark for just a 12-hour developed game. I also signed my best Audio mark, thanks to my voice along side the music. As it is an audio game, I pushed a bit of work on this side, more than usual, and it worked out. Moreover, my Overall mark is really close to the best I ever got. 3.51 is still the best, from the LD34, but with 3.36, I did good enough for 12 hours and was not expecting much. At last, I usually put a lot of effort to represent the theme as best as I can, even if the Fun or the Innovation part might be cut a bit out. This time, I thought I did a good enough representation of the theme, but was not proud of it. The result shows it. This theme definitely did not inspired me but still managed to produce an interesting, fun, innovative game that was different from the 2000 other games. Please, try it out!

My goals for the next Ludum Dare is of course to create a game that will figure in the top 100. To do that, I still have to figure out if I want to continue with Love2D or Drystal, or move to Unreal Engine or Unity. I need more time to think about that, and my current status does not allow me to work a lot on this.

Moreover, this summer, a LD36 took place but was not part of an official one (No grades). I chose to not participate in order to let me end my internship in the best condition, do my graduation oral presentation and my report and focused on my Japanese for the upcoming trip.

In January 2016, I applied to the Vulcanus in Japan program. A program between Europe and Japan who select the best European engineer in order to give them 4-month of Japanese courses in a Japanese University in Tokyo and an 8-month internship in one of the most important company of Japan.

In the end of March, I received the result of the first selection. I got selected among more than 1000 persons for the second step. We were approximately 120 people at this stage to fulfill around 40 positions. I was already really happy for having been selected among these students, so I put all the energy I had to focus on this next step. The second stage consists by choosing one of the internship proposal that were available on a list sent by email, and apply to it with a coverletter. Among this list, only one gaming company was there, Square Enix, and otherwise a lot of interesting research focused company. I already knew that applying for Sqaure Enix will certainly be where I will have the less luck to be selected because a lot of these 120 students will target this internship as well. Nevertheless, by reading the other internship, the one from Square Enix was too interesting that I decided to just try it and if I don’t get then there will be other possibilities for Japan.

So I applied, I got interviewed, and luckily, in May, I got selected among them, being the only French that will take part of this program this year. My level of happiness was over everything, just totally crazily happy. And I won’t thank enough this program for offering me such an opportunity to link both my hobbies with my work in a place I felt in love with when I came last year.

Obviously, now, it has been a month since I am in Japan, since I am enjoying every single bite of my life. Doing the best I can during my Japanese courses, and now being able to read, understand, and speak a casual and normal Japanese. Still two months to go for these courses, but I already that I will reach a level that I would not have been able to reach without this program. So, a big big thank you to this opportunity and I will inform later and the upcoming internship and events that I will do.

Next goal: JLPT Level 2. I failed the test in July, but I took it to have an idea of it. How hard it is, how long it is, how tired I am after each part. How slow I am to answer, etc. So now, I know that in December, this year, in Japan, everything will be with me in order to get it this time. And if I get, I guess I won’t be back to Europe in the coming year!

At last, my student life took an end in September, almost because with Vulcanus in Japan I still have a report to do monthly and courses to follow. I passed all my exams. So I am now with a French engineering diploma in the IT field (Equivalent to a Master’s degree in IT), specialized in Imaging and Multimedia, with international mention due to my two internships abroad. Moreover, I also succeeded in my Double Master’s degree (Master’s degree in Computer Sciences specialized in Image, language and information processing and classification (IMALANG)). So, this 2015-2016 year was even more incredible than the 2014-2015 year was. In 2014-2015, I got the possibility to go in Japan, a place I always wanted to experiment a day. In 2015-2016, I found an internship in the Virtual Reality field, a field I felt in love with during my 3rd year project but also earlier at some exhibition. This internship was moreover abroad, which was exactly where I wanted to expand my knowledge. Working in English everyday is something I was looking forward to experiment a day, so it was perfect. At last, I got my JLPT n3 in December out of nowhere and found an internship in Japan in a Gaming Industry, in a field where I want to work on, in a place I felt in love with, and this thanks to Vulcanus in Japan. So, the success of my two diplomas are the cherry on the cake (Ah, Someone is telling me that this expression is only understandable in French

Well, whatever! You get the idea). So, gradually, my years are becoming better and better, more incredible after every month. I am so happy to be where I am, to have been able to reach such a level, such a life. I will never thank again my parents for having helping me during all these years, all these long years of studies to allow me to reach my dreams! I am looking forward to 2016-2017. I already know that it’s the best year I ever had. I will do my best, even more than before and due to that, my personal projects will be paused temporarily.

I do want to program again with Unreal, so I might start a project on it next month or if I have the time this month. I am focusing a lot on my Japanese studies so it’s not as easy as before. I am also going out a bit more than usual due to the fact that I am in such an awesome place that I want to see everything. Bear with me a bit, and I will be back for the next Ludum Dare, I promise.