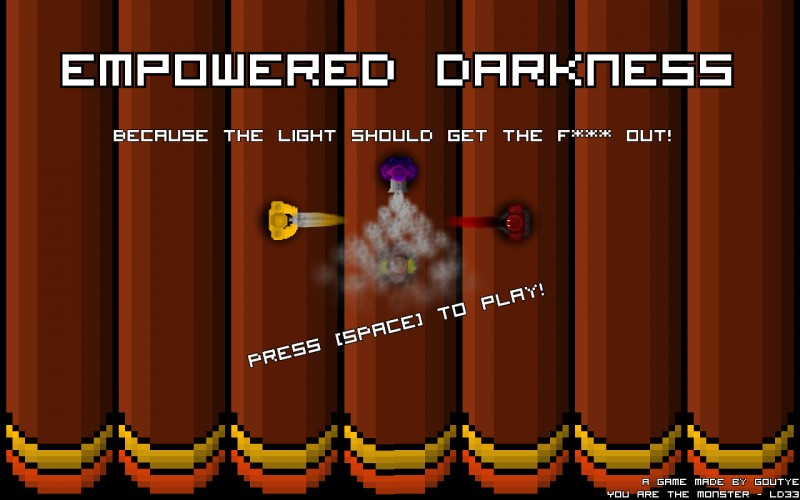 And another LD entry added to the other one! My fourth. I took quite a bit of time to write this post but because I am currently involved in my second year of Master’s Degree, I was quite busy. I would like to say too busy due to the extra challenge I was involved: JLPT. I wanted to push my learning of Japanese a bit further than I was usually learning it just to keep me working on my Japanese skills. Because of that, and a lot of stuff at ENSICAEN (projects) as well as searching an internship that really interest me, I was currently totally busy. Now, the JLPT3 has been taken during the last weekend. I am now a bit freer. That is why I am writing this beautiful summary, just some days before LD34! 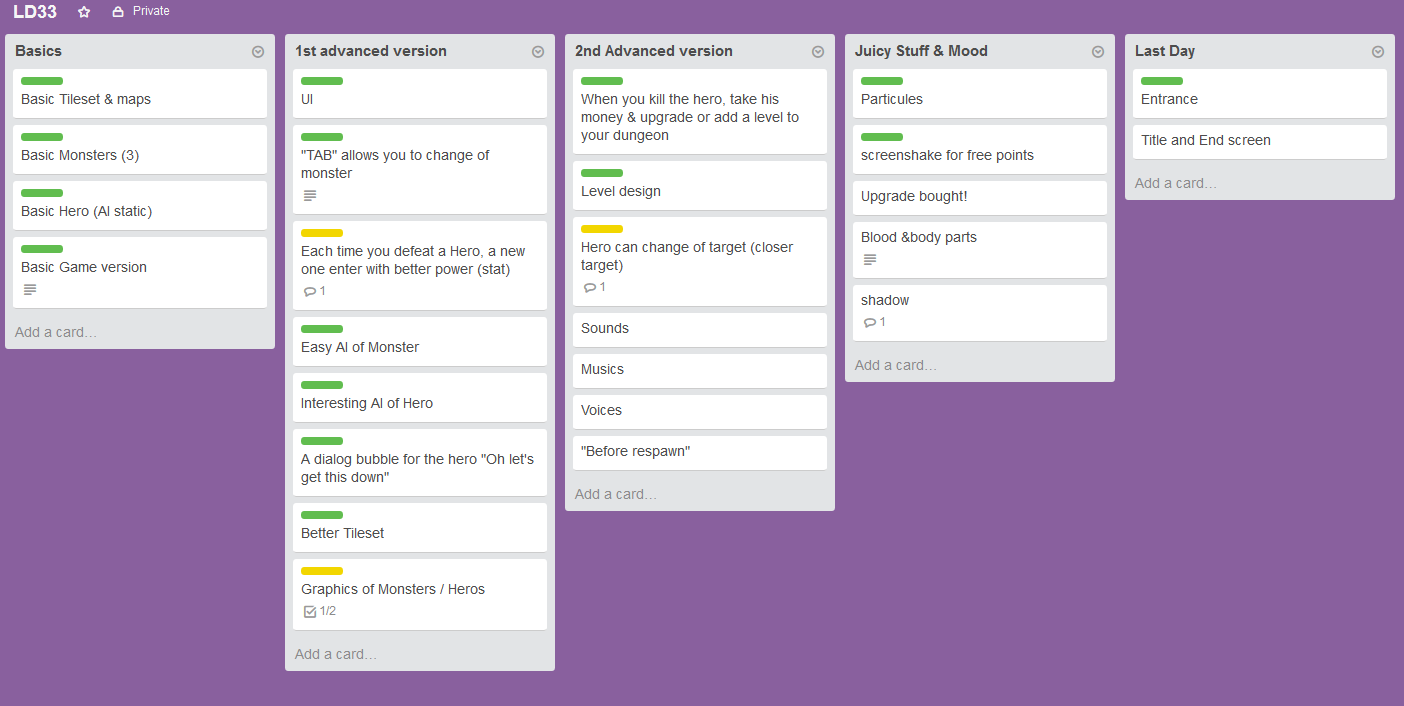 Trello – Organization of the tasks

The goal this time was to create a good mood as well as always trying to innovate. The graphics was also a part I wanted to be a bit better than the other participation. Because of that, I strongly thought about my game before writing any code.  The first problem was the theme “You are the Monster”. Not really inspired, just some classic ideas that I didn’t really like. One thing was sure: I wanted to use my new system of parallax. And then, I came up with an idea of Dungeon, but where you are the MonsterS. Yes, the MonsterS. Not really happy with it but it was the best idea I got.

The player will control 3 different monsters. One will explode when touched or activated. One will push the player with a strong breath, doing no damage. And the last one will spill out a flame line just ahead of him. The goal will be to manage to kill the really powerful Hero who is coming to destroy your dungeon and get the golds you stole. Each time you kill the hero, you will get his own money and build new floors deeper and deeper. The limit was seven floor due to the limitation time. Each floor has its particularity. One is perfect to push the hero in the lava. One is perfect to attract the player in a tight way and explode. And obviously, a special LD floor was created. The cool feature I had was the name of the Hero. The name pool is quite interesting and if you are lucky, you can get a Moon Moon hero. Of course, your monsters have only a few HP and will not survive eternally. So, you have to cooperate rightly to kill Hero after Hero. The end is when you failed, a day, due to the grinding of the Hero power. Thus, you will see who stole your money and who you killed. A special end message can appear if you are killed by Moon Moon or Mike Kasprzak (Ludum Dare host).

I chose to start with some basic graphics and 3 maps in order to make my system working. And as always, I started to program the whole game. The first thing was to do the different sort of AI for the different monsters the player will have to control. Collide, and every simple stuff was also done in an hour and a prototype was there. After 16 hours, the basic prototype was fully done. Everything was going well and I starting to think about the design of the monsters. I decided that they will be some kinds of robots and that’s all! I am not a great designer when it comes to create some sprites. I will have to train myself I guess. The first 24h done, I took some sleep, with 75% of the design done (including the retake on the tiles). Five hours of sleep later, I worked on the level design of the last levels. I had the different indicator and started to polish the game. The end screen as well. In the last 8 hours, I created the SFX as well as the remaining missing graphic part (Hero sprite :O). The title screen was done in the last two hours and was quite interesting! One of the best I made certainly. And at last, the sprite of the treasure chest was done in 10minutes due to an oversight!

In the end, I am pretty proud of the game I did. The mood is really great even though the theme seems to be a bit badly interpreted. However, the result are there and I can see that it was not that bad finally! Best entry I did!

Innovation was one of my priority, and that’s it! #203 is the second best rank I got in this rating (First was the last entry, LD32, #137). My preferred mark is the Mood! 3.24/5, first time I was able to score that high in that top! Really happy about it and the game deserves it. As always, Audio and Graphics are on the same marks. I thought I did a better job than the previous LD regarding Graphics, but it doesn’t sound like it. Certainly because of that crappy lava! The theme was “well interpreted”. Simple, but fine enough I guess! It was a mark that I was really waiting for. Indeed, since my first entry, I was unable to get a better mark than 800 and higher (really bad mark by the way). This time, I scored #337, in the top 30% of the people, which is totally great! A remember about the #189 I did on my first entry :/. Last but not least, the Fun mark. Not really happy, but not really sad about it. It remains the second best mark I got in such a top. The best one was on the last LD with #349 and the other marks were really high (900 and more). I will certainly have to focus on it a bit more than I did this time!

In the end, the overall mark is my second best one, really close to my best one (LD32, #401). A bit sad about it because I really feel this game deserves to get a higher mark than my other participation due to the mood and the whole stuff. I took really the time to refine the game but it was not enough. Not funny enough I suppose. One thing is sure, my marks are homogeneous which is the first time in my LD career!

Coming next weekend,  LD34 will certainly be a “hit or miss”. I want to create something “out of the box” or at least not using the thing I already have. I want this time to create something in just a few hours due to my schedule (Internship are my priority!). Let me surprise you!