Since September, 13th 2015, I have started a new project named “Ploucs Messenger”. The idea of this project was born in January 2014 in one of my circle of friends named “Ploucs”. The idea was to get a personal group chat fully customizable. We wanted to have a HUB which shows the news, some posts of the forum, and some other plug-ins added to the main functionality: the chat.

Unfortunately, in 2014, my skills of network were not that high added to the fact that I have some other projects. Furthermore, I didn’t learn C++ programing neither a good library to develop quickly a software. Now, with Qt, I felt as I have all the tools to begin something amazing and quickly. This project came back to my mind with some new ideas and decided to explore deeper and deeper Qt library and C++ programing with this project. The goal is to create an interface where we can add any plug-in we want such as:

The difficulty was at first to have a sort of server. This was solve by using a website and a ping each 100ms. However, it’s way better to have a real server which can keep track of the user connections. That is why the first Ploucs Messenger designed in September 13th was a TCP server.

Added to these features, I came up recently with some new ideas like a fade-in fade-out chat application when the mouse cursor moves in-out of the application. This will allow us to watch a video in full screen mode with the chat over the video as well as a video-game in the future.

I wanted to start something different from the other months. I already programmed more than 4 games in a year and feel like I wanted to change. Earlier, I said that my next project will certainly be an OpenGL game, which is always on my planned tasks list, but because the Plouc’s group just reached a sort of reborn, it was the time to start Plouc’s Messenger. The goal will then to develop “the best” chat software regarding my group and after the world. For that, I am listening to everything the Plouc’s members said and try to implement as best as possible the best rated features. Banou is then the designer of Plouc’s Messenger and will be responsible of the whole art effect and other stuffs and Fox a tester as well as a sort of community manager.

And a release date?

I will not say that “This will be ready for early 2016″ because I don’t want to wait to get the general opinion on the different features I implemented after a lot of time. I want them now, as early as possible. For that, I am releasing a version each week with a bunch of new functionalities and the software is already usable. A sort of “Sprint” development method. However, the goal is to prepare the code for the other functionalities such as “Groups admin” and so on. So, the code has to respect a certain organization and try different methods to solve the same problem to choose the best one. 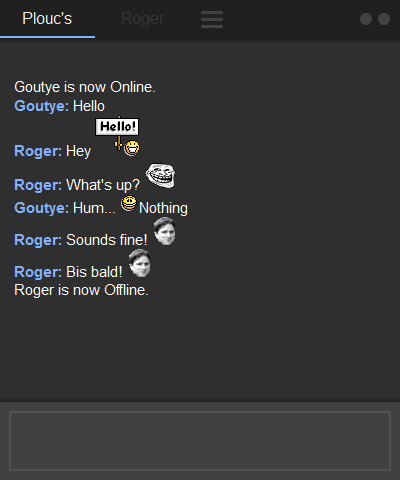 As a conclusion, I would like to say that this year will be a very busy year. I am involved in a new ENSICAEN project with a company named REALIZ which works on the Virtual Reality field, the field I am really interested in since the first time I was able to play video games with an innovative way, such as Wii or Kinect and so on. I will soon post about it! So, see you next time!