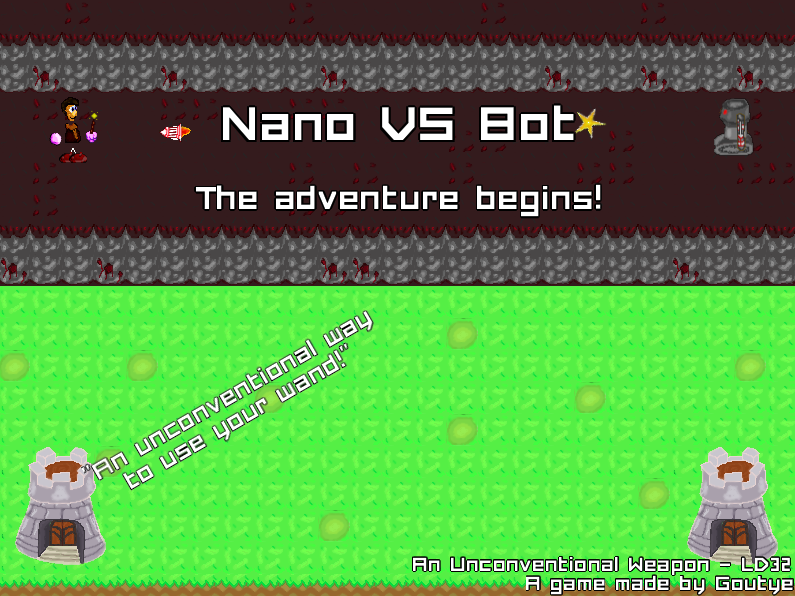 After a full week of work, I am now able to start speaking about my entry to Ludum Dare 32 edition. This is my third participation, and as we say : Good things come in threes!
For the first time, the theme didn’t inspire me so much. I had some troubles to figure it in my game but I thought about it alot and I found a way to implement it. The game I wanted to create was a game where you need to stay in collide with a way until the end. That was the idea. I used some stuffs to help me during this LD like Trello, papers, good organization of my screens. My goal during this LD was to make a better game than the two others and to make a game which will need no tutorial (implicit tutorial was made o/ ).

For the weekend of April, 18-19, I was in my family house. So, I didn’t have my home computer but a laptop with only one screen. I brought my keyboard and mouse of course to help me a little bit with this exceptional disposition. I slept less than 6 hours, so 42h of programing + one extra hour for the release/debugging of my game.

Trello, used to keep my ideas and to follow my advancement.

For the first time, I was using EasyLD, my framework dedicated to LudumDare games. EasyLD is always in development and I changed/updated some stuffs in EasyLD during this LD. I need to commit them when I will be able to check them up. Also, I was using Drystal instead of Löve2D for the release and debugging of my game. The game works under Löve2D due to EasyLD but in a darker version. I need to check why in the following weeks but I think the error is due to the color buffer which is not free/reset. Anyway, it is not the place to figure it out. I got the time to use every functionality which were in EasyLD like MapEditor, Anim8Editor, SpriteAnimation, AreaAnimation and others! I earned a lot of time and that is why this game is the best of the three I made. But my thought is I lost a lot of time due to the no-inspiration of the theme. During the first 5 hours of the second day, I was just playing my game, thinking a little bit about it but not really passionate. Hopefully, after a shower, my mind was better and I was really motivated.

The first day, I was able to get in the first hour the spirit of my game (8 hours). I had the time to add some tweening and color effects and started to make some designs by the end of the day. The programing of the bottom path was a little bit boring (with the boss too) because of the theme. That was a good idea, and I love my sprite animations and the way to beat the boss. But the path with the tower (with the grass and the bonus) were not really an interesting idea and were just here to add a mood to my game. A story. Because I needed to have something between the beginning and the boss. Maybe a full boss fight will be better, but for this kind of game, just the upper part can make a really good game! The theme is important, that’s why.

The second day, I was starting to be bored. But thanks to the shower and my trello, I was able to do some stuffs anyway and to start to add a lot of levels (48 at the end + 1 for the boss). But the game design of some levels was a little bit repetitive. I hadn’t enough of time to program all the things I thought like a cursor for the player which throws a “boomerang” which helps you keep in collide with the path. The SFX and musics were added during this day. I was using audiotracker.py this time, with the classic SFXR. After that, I polished a little bit my game and added a titlescreen and an endscreen in the last minutes of the chrono. One thing was missing in my game : particles! I wanted to add some when you are grinding the path, with a sound. And some when the boss was dying or was hit! That could be funny! However, a lot of stuffs was made and I am really happy. The feedback are going well currently! We will see the result later.

But now, I need to focus on what I learned and what I need to focus on for the next LD.
Firstly, my graphics skills! Incredible. I never thought I will make some really nice graphics if I take the time to make it. That’s the best point I think during this LD. Thanks to AreaAnimation of EasyLD, I was able to animate easily my sprites without creating the sprite animations one by one.
Secondly, EasyLD was almost perfect! Just a bug with timer sometimes, but I solved it fast enough during the LD. Need a particles module and that will be perfect.
Thirdly, I programed more than the other LDs with at least 42h. Last time I wasn’t able due to exams. This allowed me to keep focused fully on my game o/ And had the time to play/polish it a lot.

Now the bad part, there are always some bad parts! And it’s better to figure them out now.
Firstly, EasyLD was almost perfect, as I said, but needed to be developed a lot yet. Some critical bugs appeared during the LD weekend. I fixed some of them, but I need to check them one by one now.
Secondly, the theme didn’t inspire me a lot. That was a problem. But I had an idea of a game. Therefore I linked the idea to the theme and this was great enough. Maybe thinking a lot on the potential theme before the LD will allow me to come up with a good idea instead of just linking the theme to the game idea I got.
Thirdly, because good things come in threes. To polish more, more and more would be better. But program a SIMPLE game. This one was a little bit too huge because of the boss part! I lost a lot of time on the bottom part of the screen. A game with just the upper screen would be better! I knew, and I tried to focus myself on one idea. I did it, almost, but because of the theme, I had two parts. So, it wasn’t a failure.

At last, I can say that a day I will be able to make a beautiful game with a beautiful game design and a beautiful story. Yes, something was missing during this LD, a Story. I need to put the spirit of the player in my game and play with it. I wasn’t able during this LD but this is my goal for my next entry (August, I will be here!).
The game is directly available on the web (Goutye.com) and my entry can be seen on the ludum dare website.
(The music disappears if you change your tab, Drystal/IFrame bug).
Just above of this paragraph, you can find the playthrough of my game and a little bit earlier, you can find the timelapse of the LD32 weekend. Hope you will like my game. Don’t hesitate to let a comment, I am always fond of advice!