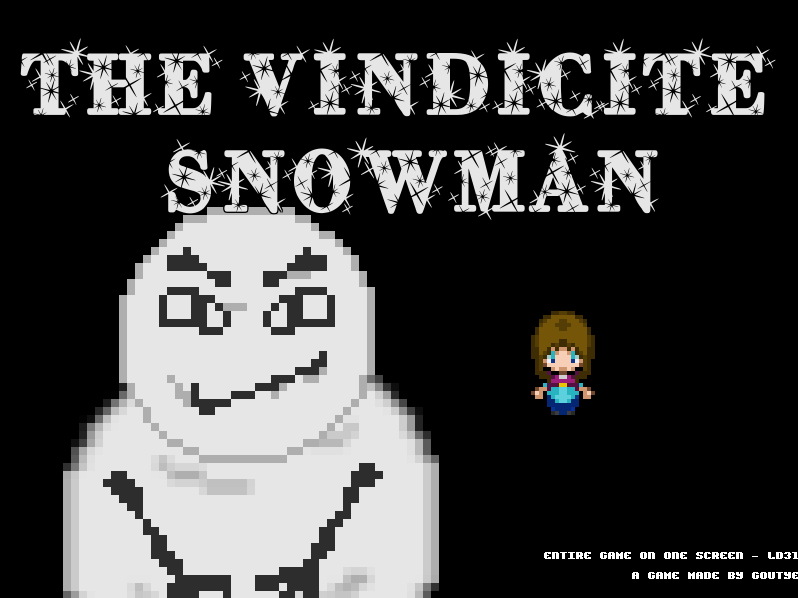 It’s time to write a little Post-Mortem! The theme was pretty simple for this time. We were free enough so many people didn’t really like this theme. But it was fine for me. Let’s see how was this LD for this session!

My game was made in only 44h (not 48h, because of exams) and I slept during 6 hours. So, the final time was in only 38h. Not that bad to make a beautiful game. But this time, I failed again because of the difficulty to contain myself in only one goal.

At the beginning, I used the snowman theme to make an introduction against this theme. But it appeared that this part of the game was not really funny at all if you don’t understand what you need to do. The answer is just in the “Do you want to build a snowman” clip. A music from Frozen, a pretty popular Disney movie. During this phase, I sang this song until the construction of the snowman. I made this part in at least 10 hours, because of drawing some tiles, some sprites. Create some map and a fade-in fade-out option. But I was happy with this part. But the problem was this part is not my game, just an introduction. And 10 hours for just an introduction, this is really bad, mostly for the game part.

Then, I had 28h to make a game. The idea was a fight against the snowman. But not a simple fight. An infinity fight. The boss will improve himself each time you defeat him. He will have more HP, more Mana, and mainly more spells! That was the goal. I developed the tournament area, the arena mode and the boss for at least 15hours. The random was pretty good with 6 spells and those spells were different enough. But that was just some test spells. Then, I wanted to improve the UI. The snowman was just a pink square, and the weapon for the user were nothing at all. I spent 6 hours on random weapon for the player and 2 hours to finish the UI. At this time, it remained only 2 hours to had more powers, more weapons, or concentrate myself on Titlescreen, Endscreen and music/sfx. I chose to center myself on the second way. I made a random music for the fight against the boss and a music for the introduction. I created quickly the Endscreen and the Titlescreen.

Then, It only remains some minutes to test my game. And I was pretty disappointed about it. Just because I knew that my game will not be complete at time. The game was playable, ok. But not really from the way I wanted to be played. I wanted to add many powers and weapons. With that, the fight will really be amazing and not redundant. But the mainly part I skipped was the move of the boss. The boss remained static until the end of the game. I had no time to put this feature into the game. That’s why I was really disappointed. The remaining 4hours maybe would be sufficient to add this.

So, I like my game. But I have many ideas to improve it as well. Allow the boss to move is the main feature I want to add. Add more powers and weapons the second. And the other features are for the scenario. During the LudumDare, I wanted that the boss yells something like “Noooooooooo YOU DEFEATED ME. … … BWAHAHAH, THIS IS NOT THE END! Prepare yourself, little Anna, my powers become stronger than EVER!” and if he defeats you, he can laugh of you o/ With my voice of course. Another feature was the arena. I want to add other arenas, with pillars and fire or water to dodge certain type of attack. And finally, I wanted, during the LD, to add the explosion of the ground each time you defeated him. You fall one level lower than the previous, with a new arena type.

So, what can I advice? Many things again.
I need to contain myself on one goal and develop it until it is really funny and completed.
I also need to create a nice mood around my game. With better sprites/tiles. It’s possible only if I had more time. Maybe a 72h session or in a 48h with the first advice followed.
I was happy with my voice, musics, sprites and my passion during this LD. My goal is now to develop some tools to allow me to program faster than this LD!

The web version is not the game. It is an adaptation of this game. Many stuff don’t work currently. (TTF Font and Music and Popup) The game is playable, but your experience will not be acceptable (No text).
Web version